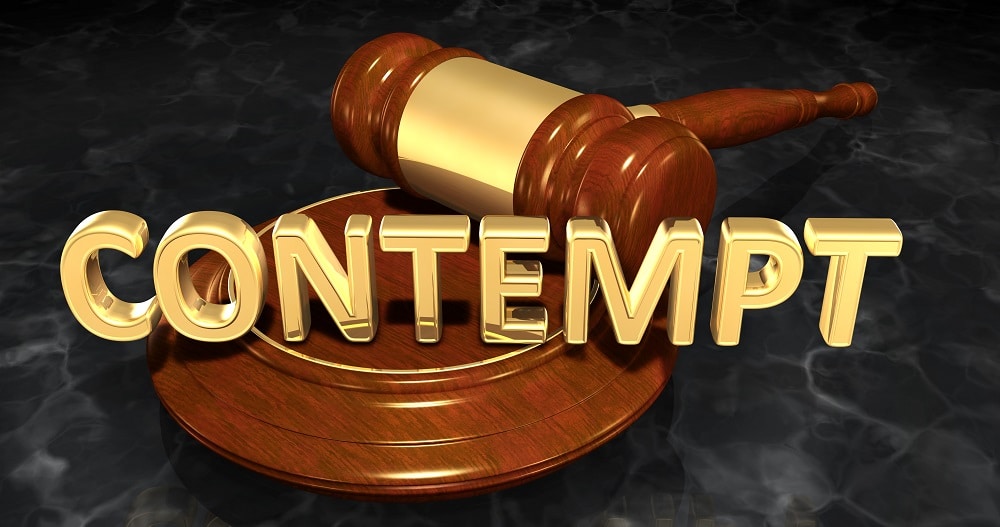 As a divorce attorney in Vancouver, WA, who regularly appears in Clark County Superior Court on divorce/dissolution matters, dealing with litigating issues involving child support, child custody/parenting plans, spousal maintenance and other related matters, it is unfortunately a common practice to enforce the orders of the court through the contempt process.

In the contempt process, if a party does not obey the orders of the court for things such as child support, spousal support/spousal maintenance and parenting plans, you have to initiate the process to hold the offending party accountable by prepare a Motion for Contempt and explain the provision of the order that is believed that the opposing party is violation in and the factual issues.  This is your vehicle for providing evidence to the court explaining what order they violated and how they violated the order in question.  The easiest example of this would be alleging that Party A was ordered to pay Party B Child Support or Spousal Support/Spousal Maintenance every month on the first and has not paid the support and/or maintenance for the last two months.  Once your motion for contempt is completed, you take your motion to the Ex Parte docket and wait for the Ex Parte Judge in the Clark County Superior Court to review your materials to determine if they believe there is a basis for what you are alleging.  If they believe there is a sufficient basis, the judge will sign an Order to Show Cause (which you need to have prepared and ready to be signed) directing the opposing party to appear in court at a particular date and time to provide evidence to the court as to why the opposing party should not be held in Contempt of Court for not obeying the order.

Once the order is signed, you must provide the other party notice of the motion, order and hearing so they have an opportunity to respond to your contempt motion and the show-cause order.  Personal Service is the appropriate form of service.  Also, make sure that when they are served the person who serves them files a declaration of service with the court and they are legally able to serve process to the opposing party.  As a practical matter, in my experience if the dissolution case is going on and they still have an attorney, in a lot of cases the attorney will accept service on behalf of the client. However, it is a good idea to memorialize that via a letter or e-mail so there are no misunderstandings and/or you can show that there was an agreement regarding service.

The opposing party has the opportunity to then defend the action by providing evidence to the court to justify why they should not be held in contempt.  In the scenario depicted previously, the opposing party may assert a defense such as an inability to pay due to loss of a job, lowering of income, etc.  The court will then determine if the party is in contempt of court.  If the parent, in bad faith, has not complied with the Order, generally an Order is entered that the opposing party is in contempt of Court, and a sanction is imposed.  I will not in my experience in the Clark County Superior Courts involving family law, I have seen and had judge’s rule that even though the party didn’t obey the order that they will not make a contempt finding in that particular case.  This the rare exception versus the norm.  However, even if you didn’t do what was required by the order, a court in their discretion still may choose not to make a contempt finding.  Of course, you should always obey all court orders and do what they tell you to do.  Otherwise, you risk a contempt ruling, where you may have to pay civil fines, attorney fees, and other relief, which could even include jail time, though this is extremely rare and reserved for the most egregious violators.

Another thing to remember is that contempt is not a remedy for all family law issues.  Specifically, you cannot use contempt to force property settlement payments, unless they are related to child support or maintenance, as an example.  Thus, it is important to understand that this remedy is not a cure-all for all family law issues.  Talk to an experienced family law attorney about whether or not contempt is an appropriate action in your case/situation.  The Law Office of Nicholas Wood, P.S. is ready, willing and able to advise you on those issues.